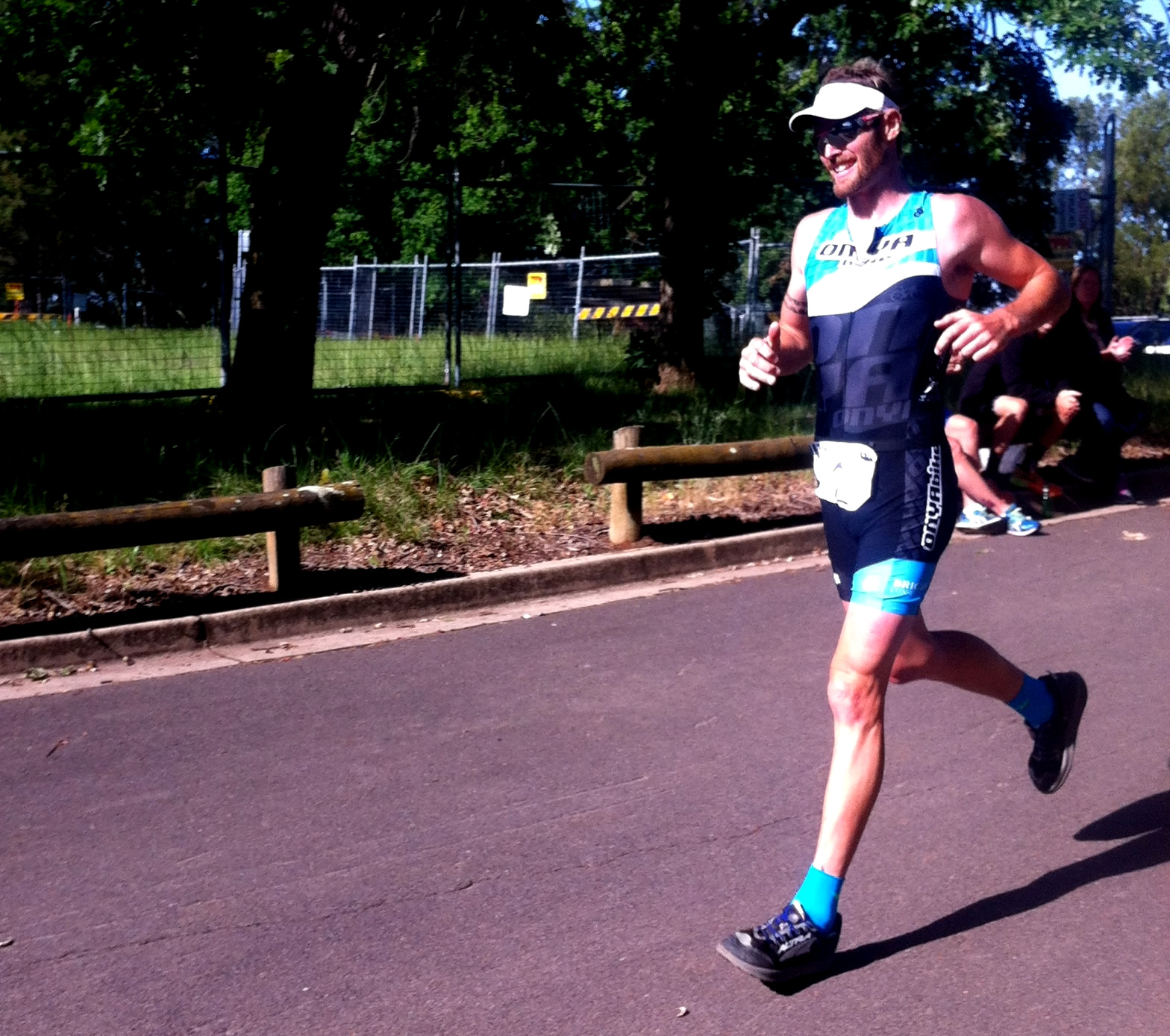 The Sri Chinmoy triple triathlon first captivated my imagination in 2009 when my now wife Amy and I first entered it as a team with our friend Scott. It showed me trails and views I never knew existed in Canberra despite having lived here for 4 years at that point. The atmosphere, the people, the course, everything about this ultimate challenge was amazing and left me wanting to do it again.

Coming into 2015 I had now done the event 3 times as a team, and in 2011 had my first attempt at the race solo. I had the race I had dreamed of and with the support of Ian, Dave and Marty not only finished the race but was the first solo in a time of 11:56:23. Since that race I had been itching for the opportunity to do it again – in 2013 I was living in Darwin and could not make it down, and in 2014 the race was cancelled due to the risk of bushfires.

Life had also changed heaps since 2011, I was a dad now and my time to train was really limited. So coming into this years race I had a real mix of excitement at the opportunity to compete again, but lots of questions as to how the race would go. I really wanted to prove to myself that the result I had in 2011 wasn’t a one off and that I could maybe go quicker 4 years on despite my compressed training time.

Training wise I had really good consistency, just the volume was lower than what I would consider ideal. I focused on getting lots of hill work in as there aren’t too many flat sections. Due to time and having a good base already in swimming I didn’t get in the pool that much in the lead up (max twice a week), but aimed to do heaps of body weight upper body strength work. My longest run in the build up was 32 km. About 3 months before the race I did a fundraiser everesting Mt Ainslie on my bike, I think I tapered for the coming 3 months following 200 km and 8890 m climbing!

Coming to the week before the race I focused on being as prepared as possible – planning out with my support team my entire race. Every detail, how many calories when, from what source, different plans for hydration dependant on the weather, gear options and points to meet me and boost my morale. Nutrition is such a critical part of endurance sport, and my plan centred around using predominantly liquid nutrition – from Infinit Nutrition Australia which simplified things massively. Together with the team at Infinit I had come up with my electrolyte drink of choice which is high in carbs, and electrolytes, as I am a big guy and sweat heavily. In addition to this I made some vegan raw food bars which would allow me to chew something during the 12 hour race!

Race morning as always was super early, up at 4 to get a good breakfast of oats, soy milk, apple, banana and chia seeds and do a last minute check of everything. Driving out to the start with my support team of Amy my wife, Daina my sister in law and friend John I was the usual mix of nerves and excitement. I love that feeling – it means you really care about what you are about to do. It was meant to be- the perfect day weather wise – mid twenties and not much wind. I took plenty of care before the start to use sudocreme to prevent any chaffing making the day really uncomfortable, a bottle of infinit and a shot of beetroot to make sure I was as fuelled up as possible.

Then it was time to race! It was rather fresh in the water with the other solo competitors at the start, including friend and training buddy Wes Fraser who was doing it solo for his first time. Once we began, I got into a good rhythm in the first swim, and was ahead out of the water into the first transition. The first transition was a little chaotic! I sat in the deck chair whilst Amy and John ripped my wetsuit off and put my gloves, socks and shoes on.

I took off on the bike, just trying to keep things under wraps and not get excited too early. It was fresh on the first ride, but I wore a wind vest along with arm warmers, which was perfect. I really enjoy the first ride, the section around Aranda, Black Mountain and Bruce, still, peaceful and great views as the sun rises and the air is still crisp. I came into the next transition feeling good, and excited for the first run. This transition was super smooth, and in no time was off up Mount Majura. It was so cool the buzz in transition as all the teams were waiting for their riders to come in, the sun was warm and the encouragement was a massive boost.

I knew at some point on this run I would be overtaken by the first team runners, and was hoping this would be towards the top of Mt Majura, a bit later than last time I raced. But as I was about halfway up Craig Benson came screaming past. I tried to just focus on my race, and not get down because I thought I was going slower than last time (I wasn’t racing with a watch, just going off feel). The section through the single track in Majura Pines is always such a highlight. The soft light through the trees and smell of pine needles a really nice juxtaposition with the more rugged Australian bush which most the course highlights.

Heading into the main climb of Mt Ainslie I was feeling slightly more fatigued than I was hoping but this was nicely balanced by the boost I got from the team runners coming past at regular intervals. Up top my team were there cheering me on which was really cool, and I happily got into the descent knowing the hard work was over for a while. I was really happy with my shoe choice for this race – a set of Altra Instinct’s, super comfortable with heaps of cushioning for the descents and bike path sections of the course.

Coming into the next transition I was pretty warm and looking forward to getting into the lake for a cool off and change of pace. I decided against a wetsuit, as the hassle of getting into a wet one for this leg definitely outweighed the efficiency gains I would get from it. The first 1 km of the swim was pure bliss, really good rhythm, really nice cool down. But the cool down unfortunately continued and I got really cold by the end of it. This combined with having consumed 0 calories in the 55 minute swim meant I was stumbling out of the water and onto my bike. Will definitely eat something in the middle of this swim next time, and investigate maybe a speed suit or something to keep just a bit warmer.

The next ride I got back into a good groove after the first 5 km on bike path. It was really cool, going across the arboretum and out through Coppins crossing I was trying to stay with Cristy Henderson as she came past. I was a bit quicker on the flats (aero bars on a mountain bike work on this course!) but she put plenty into me on the climbs. The problem was, because I had been cold and hungry getting out from the swim I then didn’t stick to my plan on this leg, and consumed double the calories I had planned to.

Getting off the bike and starting to run up Taylor I was not in the happiest place, I felt like I was going to throw up, was heavy and tired in the heat. I took my only walk of the race up the super steep fire road, walking backwards for a bit, sideways for a bit, just trying to take the load off different muscles. It was feeling like a really long day when I reached the top of Mt Taylor. Fortunately I realised that I had overeaten so just had water on this leg, and by the time I got to Tuggeranong pool for the final swim my stomach had come good. I knew I would have lost a heap of time on that run and that second place was uncomfortably close.

It was a pool swim due to the closure of Lake Tuggeranong due to algae. Jumping in was such a relief to be off my feet, however the pool was boiling hot! It was good actually having the pool swim though because it allowed me to see Warren who was in second place, which was a good jolt.

This combined with my stomach being back to normal meant I hit the final bike leg with the most energy I had all day. The 2 no dose (first caffeine of the day) also helped that. I felt great, and stuck with a couple of team riders that came past me heading up to Wanniasa Trig and loved the flowing fire road of Isaac’s ridge in the mid afternoon heat. The tunnel to finish the ride is never fun when you are 6’5” and its really disorienting when you are fatigued from having raced for over 10 hours already.

I burst out of the tunnel and was ready to hit the last run hard(ish). Another smooth transition with not much time sitting down and then I was off up Red Hill, the last climbing of the day. Coming down and onto the bike path in Curtin I felt much better than 2011, I think because my stomach had forced me to hold back more than I otherwise would have on the second run. It really was a stunning spring afternoon, and coming past Lady Denman Dr my crew let me know for the first time that I was on track to do about 11:30:00. The final 5 km I pushed, going along my favourite section of the lake bike path and with massive relief and ecstasy arrived at the finish line in 11:26:02 a full 30 minutes quicker than my last attempt.

A huge thanks to my support team for their logistical juggling, to all the volunteers and the Sri Chinmoy Marathon team in organising such an amazing event, to Infinit nutrition for making an awesome custom product that takes the guess work out, and to Onyabike Canberra for Bike support.

To race this event surrounded by such wonderful friends and endurance athletes is such a privilege. While the race didn’t go perfectly, I couldn’t have been happier at the end of it. I learnt lots, I experienced lots, and just had great fun which lets be honest is the reason we do this stuff. I can’t wait for the next opportunity to race this, and I hope that I am able to learn, experience and enjoy just as much.