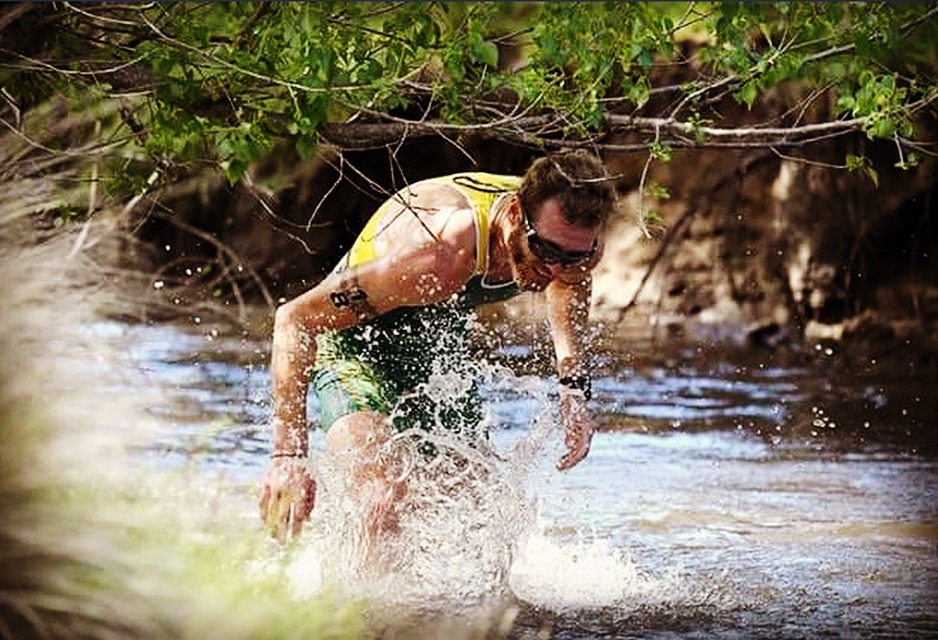 My focus of 2016 has been cross triathlon – off road short course racing following my success in the Snowy Mountains  earlier in the year, as Age Group National Champion. The winter and spring training went well, but was less consistent than I hoped due to having a toddler in the house and the cold’s that were inevitable. A big part of my focus was finding better efficiency and technique. This meant breaking down my swimming and riding in particular and I was stoked to find how much room there was to improve.

Lake Crackenback in NSW is a truly magic spot, and as the race approached the weather turned to perfect summer for us. Just a week before the race it was snowing, but race day was blue skies, no wind and a perfect 20 degrees. Having racked my bike in transition on the Friday night, Saturday morning was a lot less stressful and after setting up my shoes helmet and sunnies in transition I went off to a quiet part of the track to meditate, focus, and then warm up. I find that generally before a race of this magnitude I like to calm down rather pump up, as the atmosphere and occasion provide more than enough stimulation. I was the first wave of the morning which was awesome as it meant I shouldn’t have too much traffic to contend with on the bike.

On the start beach I adjusted my wetsuit to make sure it wasn’t hindering my range of motion, and went to the waters edge to splash my face, and fill my wetsuit so that it wouldn’t be a shock to the system hitting the water after a beach start. I was starting wide along with my friend and swim coach Guy who was also racing. The swim course was 2 laps of 750 m but the first buoy was only 50m offshore and our plan was to try and avoid the bottleneck. In the moments before the start horn I appreciated the surroundings, shook the hands of a few other athletes and warmed my lungs up with a few breathing exercises.

The horn sounded and the chaos began! I sprinted with 2 steps in the water and then dove straight away as the bank dropped steeply into the lake. The temperature was pleasant but the sprint for the first buoy had me gasping for breathe, with bodies and limbs wedging me from both sides. I was around the first buoy pretty cleanly, hadn’t been kicked too hard and then got into a good rhythm. After about 300m I was swimming with Guy which was great, we swapped off leading each other for the rest of the swim. Coming into the beach on the second lap I sped up my kick, and prepped for transition. Out of the water and the world was spinning, lungs burning but I took off towards my bike, starting to take my wetsuit down. I was twelfth out of the water, which was about where I was hoping to be, and my transition was smooth and deliberate but a little slower than I was hoping.
Out onto the 2 lap 30 km mountain bike and the first focus was keeping the heart rate from spiking as we climbed the hill straight out of transition. I was in a bunch with 5 other athletes and I tried to find my rhythm and get around them as fast as I could. I was frustrated there was not real room to overtake until about 1 km in. It was memorable though – lungs burning, cow bells ringing, spectators screaming as we weaved up the hill and through some fun technical lines 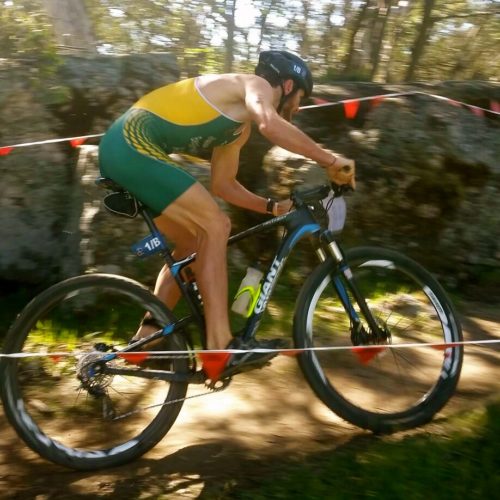 . Heading into the first decent I got past the five immediately ahead of me and started working on closing the gap to the leader. I must have got some body glide on my hands – they were so slippery on the handlebars! By about 4 km into the ride I felt really comfortable on the bike and enjoyed the mostly flat, fast and loose trails.

Heading along the river section, with the snow capped ranges to the left across the Thredbo river I caught up to the race leader Hayden Wilde. I sat on his wheel for about 500 m before the track turned and there was room to come past. Coming back near the end of the first lap of the bike I washed out on a corner and Hayden came back past. I stayed on his wheel coming through for the second lap of the bike and up through the first climb. As soon as we started to descend again I came past and dropped the hammer to get as much of a lead as possible going into the run. On the second lap there was a bit of traffic to contend with, but most people got out of the way super quick which was great. I managed to drop my chain going through a muddy section on the river, but got it back on without any problems. I used up my bottle of Infinit nutrition quicker than expected – I was pretty thirsty due to the unseasonably cold lead up to the race.

Coming back into transition for the second time was a pretty surreal experience, everyone screaming at me ‘go Australia’, the commentators telling the story of my race, cow bells ringing and camera’s flashing. I had a clean transition and was straight out onto the run after getting some more Infinit in. The run was gruelling. It was straight into 3 swamp crossings with scrambling up and down steep banks, a run across a suspension bridge and around an obstacle course all within the first 1 km of the 3.3 km loop. Amy shouted out that I had about 30 seconds on Hayden going out of transition and I had the uneasy feeling that wasn’t going to be enough. Sure enough after another 300 m Hayden came past, his running pace was incredible. After some great pinching climbs, rock scrambles and grass tracks we jumped into the Little Thredbo River for a 80 m run in knee to waist deep water. Having an ice bath was certainly an added dimension mid run, tired muscles spasming with the extreme temperature change. After crawling through a tunnel the course then flattened out into a much faster less technical second half back to transition.

Coming through for the second lap I was just focusing on technique, posture and foot placement to try and stay in touch with Hayden. By the third lap I was properly on the limit and when Lewis Ryan came past me with about 2 km to go I had no capacity to give chase. Coming through transition and onto the finish straight was one of those moments that are vividly etched into my memory. The photographers, my friends, the waving flags, the cow bells, the screaming supporters, the cheering commentators. Crossing the blue carpet at the finish was truly special after having given what I could to the course. I was third outright in the men’s Age Group race, the first Australian and World Champion of the 25-29 category. It is a special feeling to have a race where everything more or less goes to plan. Endurance sport is such a tricky thing to get right. There are the decisions you make every moment during the race – Should I eat now or later? How hard can I push this corner? Should I overtake or hold back? And then there are all the things beyond your control – mechanicals, injuries, sickness and other competitors – that when it does all come together it just makes it so special.

On the Sunday I was lucky enough to back up as a member of the Australian mixed relay team alongside elite’s Charlotte McShane, Ben Allen and Age Group World Champion in 25-29 Kate Bramley. The format was a super fast and fun super sprint where we each completed a 200m swim, 5 km mountain bike and 1.5 km run in a relay format. We all had a total blast and raced well enough to take the inaugural gold medal. I think this weekend is going to take a while to top – 2 ITU gold medals in 2 races in 2 days.

A massive thanks to everyone that helped me have the race I did. To Infinit nutrition who’s expertise has helped me have the best customised nutrition solutions available for the past 5 years. To Onya Bike Canberra who bent over backwards to help out with last minute mechanicals and get my bike to the start line dialled in. To Sweet Bones vegan cafe and bakery for the friendship, and keeping me fuelled with exceptional food and coffee. To Ride Technics for the skills on the bike to go faster whilst saving energy. To Guy Jones for your swim coaching. To all my friends that I train with, that push me, that make sessions that bit more fun. To Amy for your love and support in everything I do. And finally to the volunteers, officials, other athletes and event organisers that put on such an amazing event. Thanks Mandy Lamont for the top image. The Triathlon Australia race report can be found here – http://www.triathlon.org.au/About/Latest_News/Young_Kiwis_and__Beggs-French_push_the_limits_in_Cross_Tri_shoot_out.htm, and Dirt Tri Magazine report here – https://www.dirttri.com/news/first-ever-cross-triathlon-mixed-team-relay-wildly-popular/